St Albans Secondary College has walked away from this year’s Fashion Awards Australia with the event’s school cup for the fifth consecutive year. Students, including My, who designed the dress worn by model Angelic (left) and Anh and Casey all excelled at the awards. ST ALBANS Secondary College students have secured victory at a fashion competition with their spectacular sewing, style and sequins.

Several students from the school entered the Fashion Awards Australia, which took place in Taylors Lakes earlier this month.

The college won the event’s school cup for the fifth year in a row.

In the open section, My Nguyen came first in the recycled clothing category and second in the long gown division.

Casey Quach won the first prize in the open costume category. Simone Truong was second in the calico division and Carla McGuire won second prize in the year 9-10 calico category, plus a third in the upcycle section.

My, 18, who entered six separate designs in the fashion contest, said she had been working on the garments all year.

“I don’t think I could sleep the night before so I got up and stitched some sequins on my long gown,” she said.

“I want a career in fashion and plan to do a diploma in fashion, so the award is an important step toward my future career.”

Anh, 16, said she felt “very proud and happy” to get a first prize and also hoped to become a fashion designer.

Casey, 17, said she was “ecstatic” to place first in the costume section while modelling her gown.

The students thanked their “awesome” teachers Michael Bowden and Nick D’Aglas for their support. 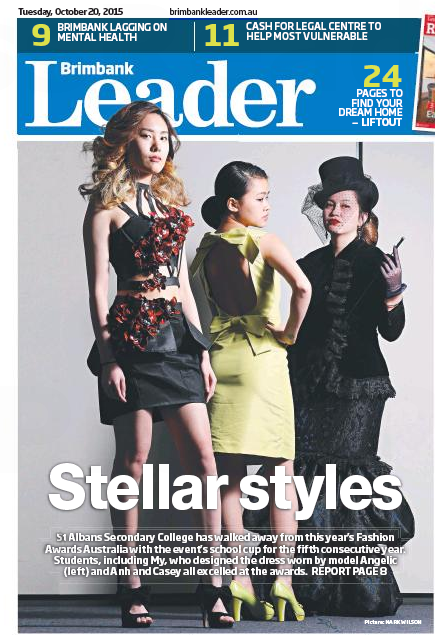 Angelic models a dress designed and made by My Nguyen (right).