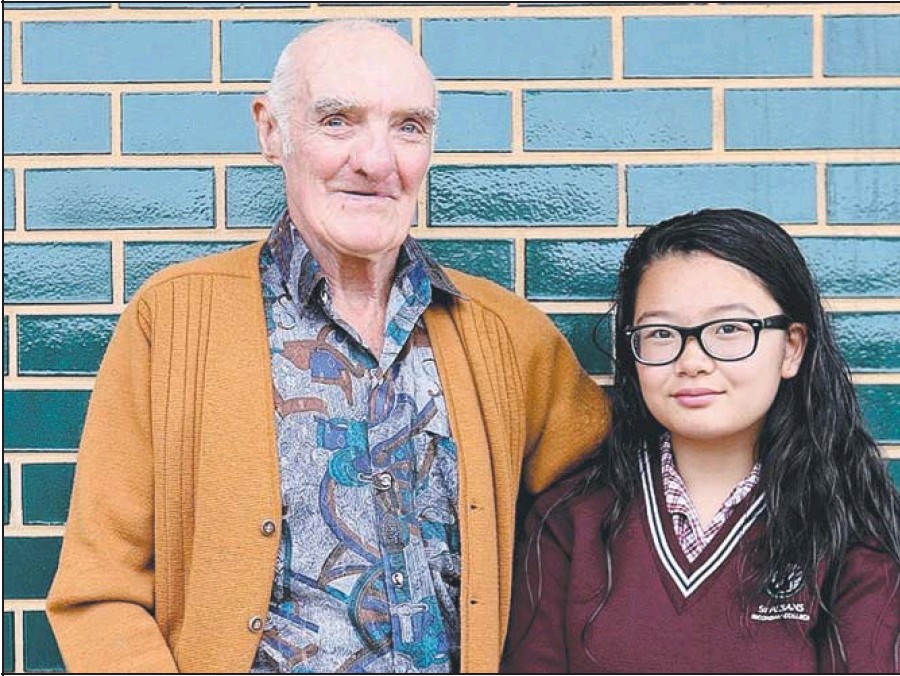 George Pyers, from the class of ’56, gets a tour of the school from year 7 student Cindy. Picture: MARK STEWART

WHEN St Albans Secondary College first opened its gates, there was a cow paddock next door and students walked to school on dirt tracks.

This year, the school, originally named the St Albans High School, will celebrate its 60th anniversary.

Ms Malakunas, Mr Pyers and Mr Kratsis were the first-ever Form 1 (year 7) students to start at the college in 1956.

Principal Kerrie Dowsley said, at the time, there were 126 students from 21 nationalities
at the school.

In comparison, nowadays, the school has 1370 students from 50 language groups.

Mr Pyers, a former member of the school’s football team and cross-country runner, still remembered watching steam trains run under a footbridge as he walked to school.

Mr Kratsis said during the ‘50s, the school was also next to a cow paddock.

Ms Malakunas, who was a house captain, said children used to walk to school on unpaved dirt tracks.

The trio of former students attended a deb ball in 1960, at the Tin Shed in St Albans, which was started by the school’s librarian, Lorna Cameron, whom Mr Kratsis described as a “stalwart in the community”.

Mr Kratsis remembered a class when Mr Walsh informed students that he had lost their exam papers while sitting on Williamstown pier on a windy day.

St Albans College has invited past and present school community members to join its celebrations at a dinner dance on June 11, followed by an open day on June 12.

The school is also looking for memorabilia, such as old school photos or uniforms.

For more information, contact the school office on 9366 2555, or go to stalbanssc.vic.edu.au